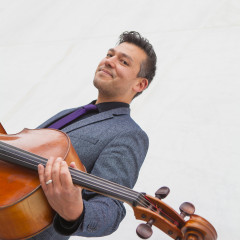 Cellist Sean Neidlinger enjoys an active career as a recitalist, chamber musician, orchestral musician, and teacher. After receiving a Bachelor of Music degree from the Cleveland Institute of Music under the tutelage of Richard Aaron, he pursued further studies at New England Conservatory with Paul Katz. Described as “fiery” and “impassioned” by the Washington Post, Sean’s playing has garnered top prizes at several orchestra concerto competitions. He has been featured as a soloist and chamber musician at the Korean, German, French, and Austrian embassies, the Phillips Collection, the Kennedy Center Millennium Stage and Terrace Theatre, the Washington Metropolitan Philharmonic and the Friday Morning Music Club orchestras. He also has performed with the Baltimore Symphony Orchestra, the Kennedy Center Opera House Orchestra, the Eclipse Chamber Orchestra, and has served as principal cellist of the American Pops, Amadeus, Winchester, McLean Orchestras. Sean has toured Europe as a chamber musician and as a soloist for the world premiere of the Rodriguez Elegy and Rondo for cello and wind ensemble. This past Spring, Sean also embarked on a four nation tour throughout the Caribbean on a program of cultural outreach sponsored by the United States Department of State. As an artist always intrigued by mixed art forms, Sean won a grant to create a performance installation alongside the Warhol exhibition at the National Gallery of Art.