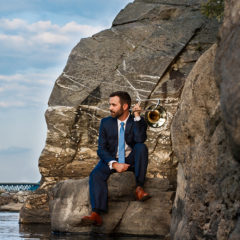 James Aaron Martin is an orchestral and solo trombonist based in the Washington D.C. metropolitan region. He received Master of Music and Pedagogy from the Royal Conservatory of Music in Aarhus, Denmark and his Bachelor’s degree in Music Performance from the Shenandoah Conservatory. During his studies, Martin has been a frequent recitalist of 20th century music and has given performances of solo repertoire for trombone and organ worldwide. Martin was honored to work alongside former Berlin Philharmonic bass trombonist, Stefan Schulz, in the premiere of Poul Ruder’s Concertino at the 2009 International Trombone Festival.