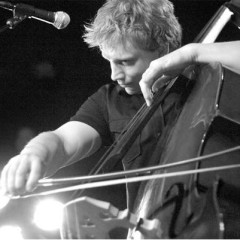 Greg is honored to be one of the first musicians to play with APO. He plays double bass and bass guitar – and if necessary, but only in a musical emergency, baritone ukulele. On occasion, he has also contributed arrangements for the orchestra.

Greg’s career trajectory started by training in the rigors of orchestral performance; to obtain a position as a double bassist with a professional symphony orchestra. In college, he was moonlighting with big bands such as The Radio King Orchestra and The Imperial Palms, learning the repertoire of Ella Fitzgerald, Glenn Miller, Duke Ellington.

While continuing to work with orchestras and big bands, Greg started working with film and television composers, and contributed to soundtracks for films and broadcasts for CBS television, NBC, Miramax, HBO, Netflix, Discovery Channel, Showtime, and Cinemax.

During one of these recording sessions, Greg played for Carlos Bernardo, a Cuban-American singer/songwriter. Together, they formed the pop/rock group, The Sketches. They recorded several albums, toured the country, and had a few songs in movies and TV shows.

In addition to big bands, rock bands, and symphony orchestras, Greg has had the good fortune to perform for many musicals at theaters such as Kennedy Center, Arena Stage, Ford’s Theatre, and Shakespeare Theatre. Highlights include Wicked, Oklahoma!, Into The Woods, Kinky Boots, The Secret Garden.

Greg maintains a private teaching studio of bassists and one erstwhile baritone ukulelist.

Greg studied Double Bass performance at The Peabody Conservatory of The Johns Hopkins University. His bass teacher was the great John Hood of the Philadelphia Orchestra. Greg also studied bass with the legendary Curtis Burris, retired from the National Symphony Orchestra.

While on an APO educational tour in West Virginia, a student came up to us and we gave him impromptu music lessons. I hope he keeps playing.

“God Only Knows” by Brian Wilson