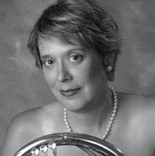 Amy has been The American Pops Orchestra’s Principal Horn since 2016.

Amy Horn is a versatile performer with extensive solo and ensemble experience. As a musician in the DC metropolitan area, Ms. Horn has performed with most of the Washington area’s symphony orchestras including the National Symphony, Baltimore Symphony, and Alexandria Symphony, where she is Principal Horn. She has also performed with the Harrisburg Symphony Orchestra in Harrisburg, PA and with the Richmond Symphony in Richmond, VA. Ms. Horn has been a member of the Washington Symphonic Brass since 1993, featuring some of the best brass players in the Washington, DC area and can be heard on all six recordings available on the Summit label and iTunes including the latest, “Home for the Holidays” and “Classic Rock for Brass.”

Ms. Horn has been a frequent soloist in the Washington, DC area and has also appeared as a soloist and clinician in Ohio, New Mexico, Georgia, and New York.  She was a finalist in the 1994 and 1989 American Horn Competition, competing against other professionals throughout the U.S. in horn solo literature.

In addition to performing, Ms. Horn enjoys teaching a studio of horn students of all ages and has been invited to adjudicate numerous area school music competitions and auditions. She is an adjunct horn instructor at George Mason University in Fairfax, VA. Ms. Horn has loved being a member of  “The President’s Own” United States Marine Band for twenty-eight years and even sang with their dance band at the White House during the Clinton administration.

I loved the first kid show we did – Cinderalla